Yellowfin are the second most abundant tuna. The meat has long been used in the canning industry but has in recent years gained popularity as a fresh fish in restaurants. The yellow fin has a mild flavor, less rich than the bigeye and its red color turns to an ivory when cooked. Japan and Mexico are major producers of yellowfin with some being caught off the Northeastern coast of the United States around New England , but most are landed off the west coast of Mexico, the Gulf of Mexico and Hawaii. The tuna meat should be a bright translucent red with a firm texture. If the tuna has struggled in the harvest it will appear brown and opaque, this is called “burned” and this fish should be avoided. Tuna imported by Tasty Seafood Inc is tested for quality at our plant in Miami before being packaged for shipping within the USA. Our tuna fishermen run only ‘short trips’ typically going out to fish and returning the same day with their catch iced down on the boat. That way we can ensure the best quality fish delivered to its final destination. The value of Tuna is determined by meat color, fat/oil content, freshness, texture, and shape and size. Formerly, much of the commercial catch was made by pole-and-line fishing, using live bait such as anchovy to attract schools of tuna close to the fishing vessel that were then taken with baited jigs on sturdy bamboo or fiberglass poles or on handlines. Purse seining largely took over commercial tuna fisheries in the 1960s and 1970s. Today, purse seines account for more 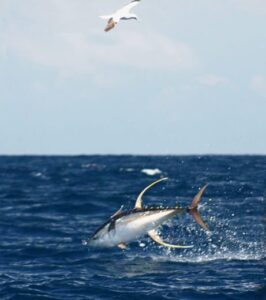 of the commercial catch than any other method. The purse-seine fishery primarily operates in the Pacific Ocean, in the historic tuna grounds of the San Diego tuna fleet in the eastern Pacific, and in the islands of the western Pacific, where many U.S. tuna canneries relocated in the 1980s, but significant purse-seine catches are also made in the Indian Ocean and in the tropical Atlantic Ocean, especially in the Gulf of Guinea by French and Spanish vessels. Most of the commercial catch is canned, but the sashimi marketplace adds significant demand for high-quality fish. This market is primarily supplied by industrial tuna longline vessels. Industrial longlining was primarily perfected by Japanese fishermen who expanded into new grounds in the Western Pacific, Indian, and Atlantic Oceans in the late 1950s and early 1960s. Longlining has since been adopted by other fishermen, most notably South Korea, Taiwan, and the United States. Tuna longlining targets larger sashimi-grade fish around 25 kg (55 lb) and up that swim deeper in the water column. In tropical and warm temperate areas, the more valuable bigeyes are often the main target, but significant effort is also directed towards larger yellowfins. Longlining seeks areas of higher ocean productivity indicated by temperature and chlorophyll fronts formed by upwellings, ocean current eddies, and major bathymetric features. Satellite imaging technology is the primary tool for locating these dynamic and constantly changing ocean areas. For more information check: https://en.wikipedia.org/wiki/Yellowfin_tuna