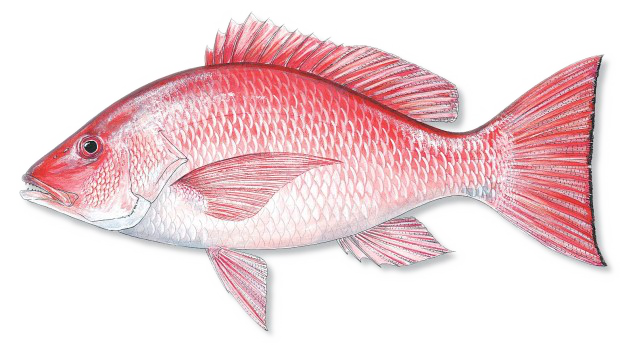 There are 5 main species of Snappers but the Red Snapper is the most popular and sought after. The Snapper is a warmer water fish, which gets its name from the energetic way it shuts its mouth, and is highly sought after. Red snapper, in particular, is at the top of the popularity list. Snappers range from Long Island to Brazil, but the Gulf of Mexico is where the highest quality American Snappers are caught. The heaviest domestic landings occur in Florida during the summer months. Common from a pound or so to about 6 or 8 pounds. Usual maximum is about 20 pounds, although the Red Snapper can rarely run as high as 30 or 40 pounds. World record 50 pounds, 4 ounces; Florida record 46 pounds, 8 ounces. Red snapper (Lutjanus campechanus) are one of the Gulf of Mexico’s signature fish. They are extremely popular among recreational fishermen and a prized offering at restaurants and seafood markets, as well as a top predator in the Gulf ecosystem. Recently there has been a great deal of debate about the health and management of this important fish. Ocean Conservancy, along with Pew Charitable Trusts, has released a report about the law that is saving American fisheries, including red snapper. Red snapper have been severely overfished in the Gulf but are now on their way back. The Gulf snapper population reached its low point the late 1980s, but since then science based and effective management and favorable conditions for reproduction have put the red snapper on the road to recovery. Since 2009 catch limits for snapper have steadily increased. At Tasty Seafood we are working with our fishing fleets to make sure the fish we sell are fished according to the local laws and observe the fish management rules laid down locally and internationally.